Officially the fastest guitarist in the World at 620bpm! 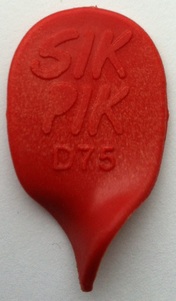 Pick used and donated to Tina's Picks by John Taylor
When John broke the record the first time at 600 bpm he used a bog standard Jim Dunlop 1.5mm flat pick. After the official record, he was contacted by Sik Pik and asked if he would be willing to try their design. (The previous record holder, at 340bpm, Tiago Della Vega had used a Sik Pik for his record.)

John decided to give them a go. It took him about a week to get used to them, but after that, he was hooked and has been using ever since. When he broke the record again at 620 bpm in Hong Kong he used a Sik Pik D75.

On April 23 2011 in Arvada, Colorado, John Taylor set a new world record of 600bpm (beats per minute) for speed on the guitar in both the Guinness Book of World Records and in the Universal Records Databank.

In January 2012, John broke this record in Hong Kong with an incredible speed of 620bpm!

John Taylor aka Dr. Hot Licks played the classical piece on the electric guitar that the most candidates going for the world speed record use, the “Flight of the Bumblebee” from the Russian Nikolai Andrejewitsch Rimski-Korsakow, written in 1899. The original was written for tempo 170 bpm (beats per minute).

The world record previous to his last record, was held by Tiago Della Vega, a Brazilian rock guitarist. He set the record in 2008 by playing the “Flight of the Bumblebee” at 340 bpm.

His official listing in the Guinness Book of World Records was guaranteed by a representative on the day. Taylor can carry the title of “Fastest Guitar Player” in the world with pride from now on.


Rules for the record
- performance must be live
- no overdubbing allowed
- must strum strings in advance to demontrate you are playing through an amp or use acoustic guitar
- must begin attempt by playing song at original speed alongside a midi track that plays notes perfectly and match every note
- must repeat performance at a gradually increasing tempos to demonstrate full knowledge of song
- category creators must submit tablature for moderators to look at and to ensure challengers follow original performance
- analog clock must be present in frame for duration of attempt
This is an amazing video of his previous record of 600bpm which he later beat at 620bpm. It's worth watching it all the way through to see him gradually build up to 600bpm at 5:20!
Check out he video below for a taster of Dr Hot Licks' School of Rock and Metal online lessons.