I've separated this page in to OLD and NEW, as Graph Tech have now changed these picks slightly.  The OLD ones, are the ones I fell in love with and have been using for a few years.  I'm currently about to give the new ones a go, so will comment back here when I've given them a good try.  In the meantime, if anyone knows where I can get hold of the old ones from (with the letter A on), please can they contact me here!
OLD
What I didn't realise is that Graph Tech Guitar Labs, is the world’s largest guitar nut and saddle manufacturer and have been using TUSQ in their products for almost 30 years!  After being constantly asked by guitarists, they launched these new TUSQ Picks only recently at NAMM 2012! 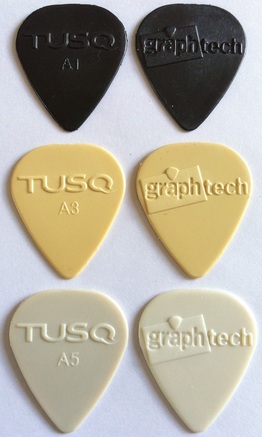 _I didn't really know what to expect with them (having never played with ivory).  I'd read that they were made of a highly resonant material but that was all.

I knew straight away that they were definitely different because of the lovely 'clanking' sound they made together! It's hard to explain, but they definitely feel different to other man made plastics. It's only since then that I've read other reports that describe it as a 'tinkle' and you do notice it from just picking them up.

If you do the 'drop' test, you'll hear this too!
The next amazing thing about these is how stiff they are, yet as thin as standard picks. My favourite is the 0.68mm which would normally be way too thin for me.  It played like a much thicker pick giving a  really good full sound.  The other thing to notice is the lack of string noise when the pick strikes, it plays perfectly naturally and really lets the string sound ring out. Because it has such positive attack, the sustain is better too. The embossed/debossed logo gives it a good grip. 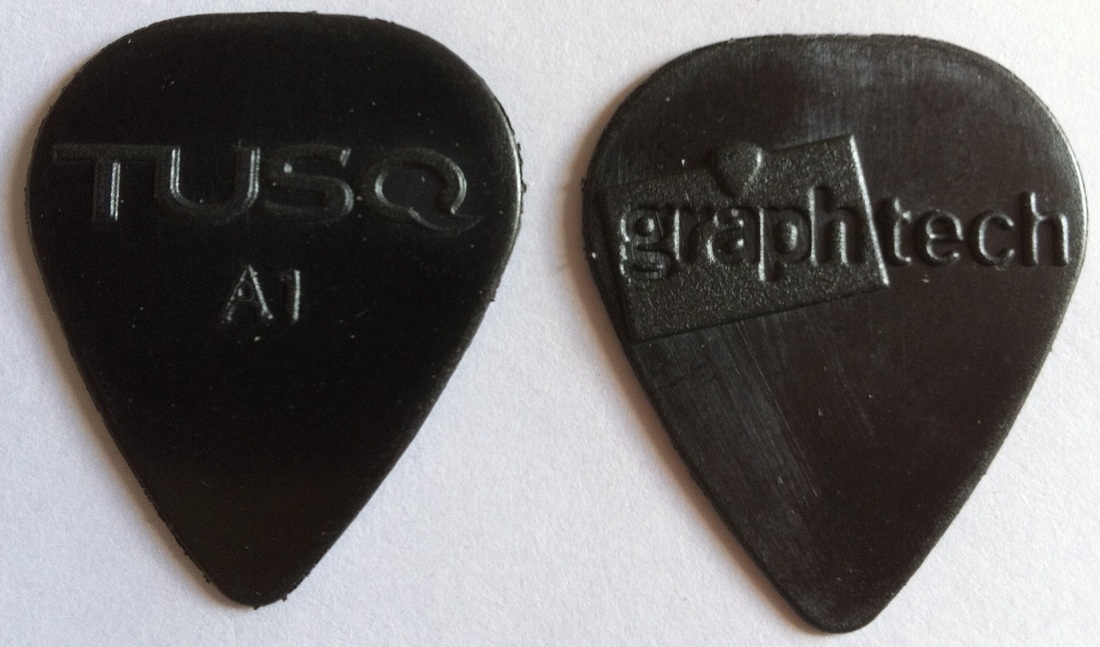 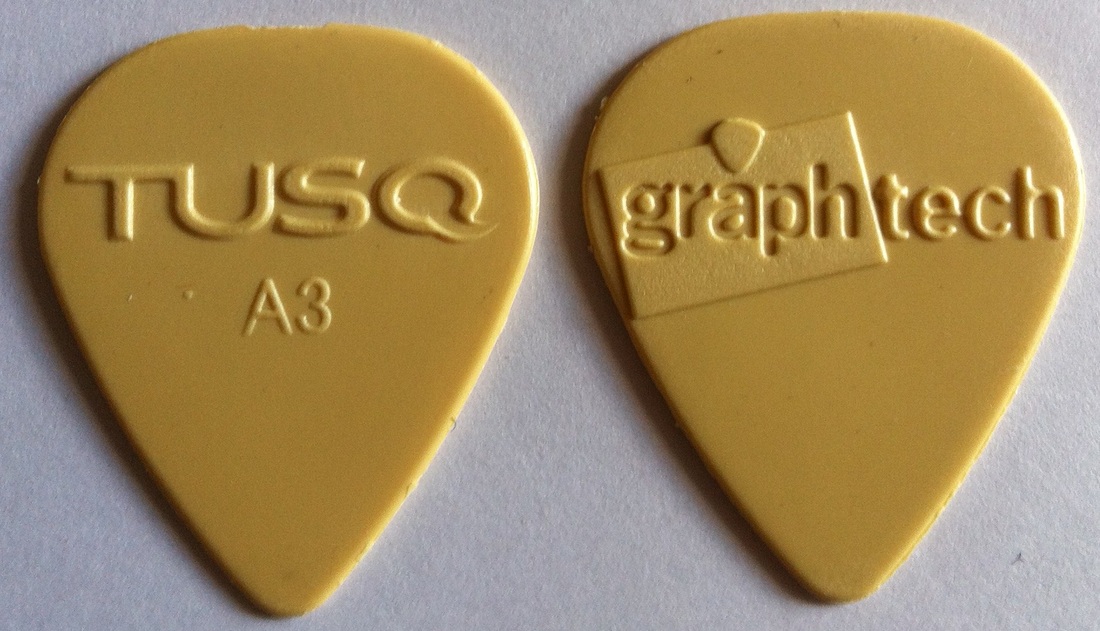 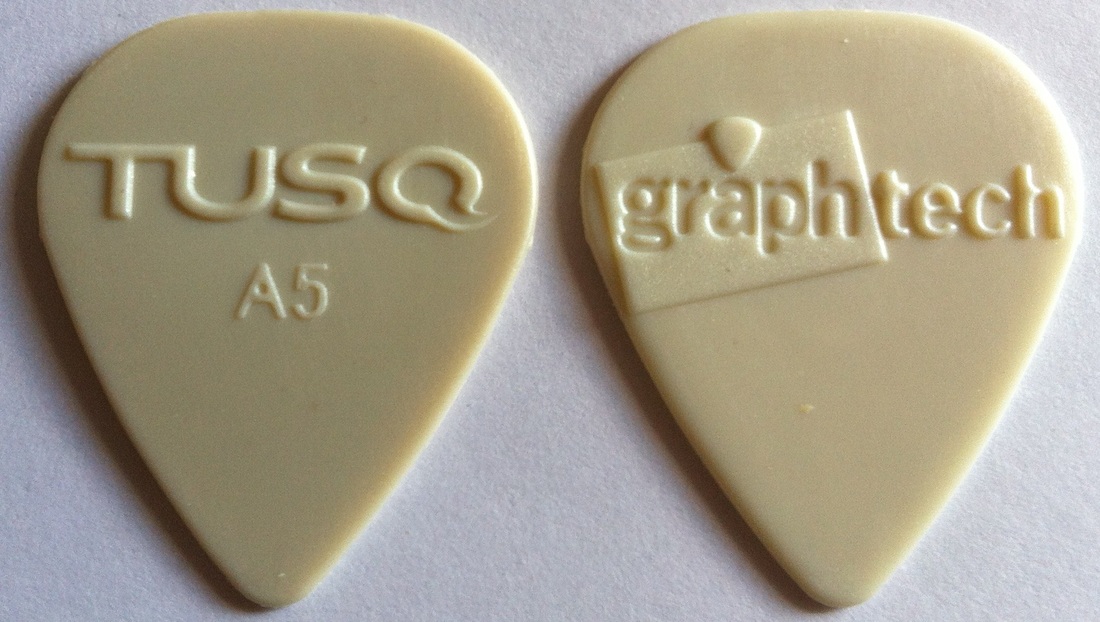 1.00mm
I really like the embossed/debossed logo. My initial thought was that the colours looked bland and wouldn't stand out in a shop, but having got used to them, I like the fact that they're very vintage looking. However, I think it's always nice to have a choice of colours! (or is that just a girl thing?!)
Hopefully they'll be introducing some more shapes too, like the Jazz. I think these are going to take off in a big way once people start trying them and word gets out there. 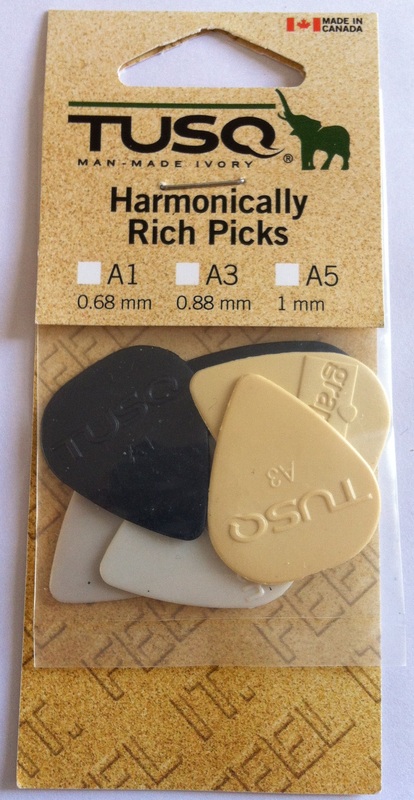 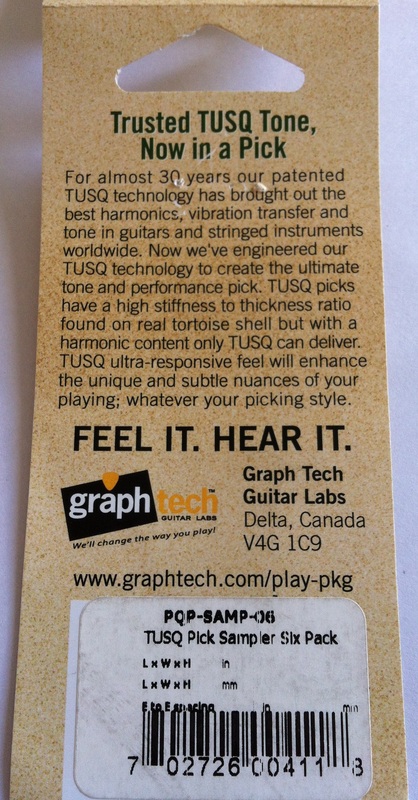 http://www.graphtech.com/products.html?CategoryID=22
_Here's the official blurb!
"For almost 30 years our patented TUSQ technology has brought out the best in harmonics, vibration transfer and tone in guitars and stringed instruments worldwide.  Now we've engineered our TUSQ technology the ultimate tone and performance pick.

TUSQ picks have a high strength to thickness ratio found on real tortoise shell but with the harmonic content found that only TUSQ can deliver.  TUSQ's ultra responsive feel will enhance the unique and subtle nuances of your playing; whatever your picking style."

The immediate difference is the embossing.debossing.  The old ones had a nice rounded finish to the font and to the material, whereas the new ones have a much straighter edge.  Not sure why they've done this, whether it's a purposeful shift in design or whether it comes from being mass produced now?

Also, the labelling has changed.  Gone are the 'A' numbers and they are now just known by their gauge. 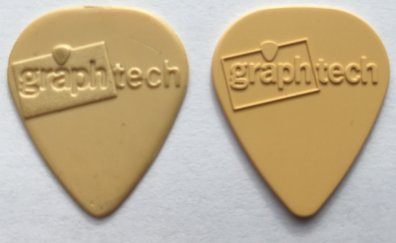 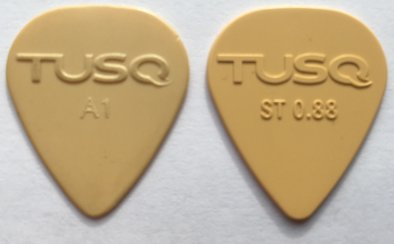