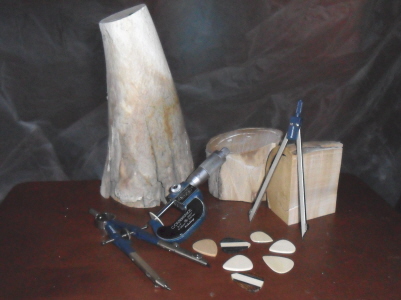 I really like this pick - the shape is comfortable to hold (I play with the point, holding it writing downwards). It is really firm and obviously doesn't flex, but is still nice and thin. It's got a very direct sound and is warmer than I expected. Very good for lead.
What is it?
Mammoth is the ONLY 100% legal AND ethical source of ivory

Woolly Mammoths are extinct, having died out approximately 10,000 years ago.  The only way to kill a mammoth these days is to hop in a time machine, dial it back 10,000 years or so and fight off saber-tooth tigers and other Ice Age fauna in your quest for your mammoth trophy!  Today, mammoth tusks are found primarily in the Tundra of Russia and North America during the Summer thaw.  In Siberia, mammoth tusks are sometimes found sticking out of the ground after being pushed up through the layers of earth.  In Alaska, gold miners find many of the tusks as they dig for their riches.  Mammoth Ivory is certainly a finite resource, and is becoming more difficult to acquire each year.
Why?
TuskBuffer Mammoth Ivory Guitar Picks will improve your tone

If your tone is important to you, then you'll want to pay attention here.  Due to the density of the material, Mammoth Ivory picks produce a nice, bright, strong tone without the harshness of metal picks, especially on acoustic guitars.  Think about it...the pick is what makes contact with your strings and really has the most direct influence on your sound.  The effect is certainly not lost on electric guitars, but electronics, effects boxes and other controls may work to cover up the tonal effect.  On the other hand, mammoth ivory picks will allow you to do some great musical acrobatics, making notes more pronounced and powerful, improved pinch harmonics and a really cool sound and feel altogether.

The "Ivory Grip" may be the most important feature of TuskBuffer Mammoth Ivory Picks.  They just stay put.  Ivory is just slightly absorbent, and when your fingers get sweaty after playing for a little while, the picks actually pull themselves to your fingers as they try to suck up the moisture, giving you ultimate control!  In contrast, plastic repels moisture, which is why they get slippery and can lead to sloppiness in your playing.  Just imagine not having to constantly compensate for the sloppiness of plastic picks.  How much better, faster, more accurate would your playing be?  No more dropping your pick under the hot stage lights, and any guitar player (beginners included) can instantly kick their playing up a few notches with just one pick!


So, just imagine making music with part of a once living Woolly Mammoth that last saw the light of day maybe 10,000, 25,000 or even 40,000 years ago!
Visit the TuskBuffer website here and own a unique piece of history!