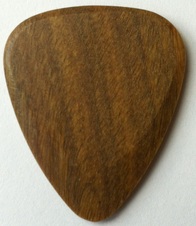 Real Lignum Vitae (Guaiacum officinale or Guaiacum sanctum), such as this, is very hard to get now because it is on the CITES (Convention on International Trade in Endangered Species of Wild Fauna and Flora) list, so exporting is restricted.

Lignum Vitae is the heaviest and hardest wood in the world. It has a Janka hardness rating of 4500 lbf. This wood was once very important for applications requiring a material with its extraordinary combination of strength, toughness and durability.
The wood is obtained chiefly from Guaiacum officinale and Guaiacum sanctum, both small, slow growing trees and is one of the numerous hard, dense woods referred to as Ironwood.
Our Lignum Vitae plectrums are manufactured from off cuts from musical instrument and furniture manufacturing.

Interesting Facts:
Lignum is one of the only woods that will sink in water.
Lignum Vitae is the latin for 'wood of life' and derives from its numerous medical uses.
Some cricket balls, croquet mallets and skittles are made from Lignum Vitae.
Merlins wand was also said to be manufactured from this material.

Playability:
Lignum is very hard wearing and self lubricating thus we recommend this timber primarily for soft use on Bass Guitar.
Lignum Vitae is also included in the Electric Four pack although we would advise against using it for shredding as Lignum does not withstand abrasion as well as Ebony.