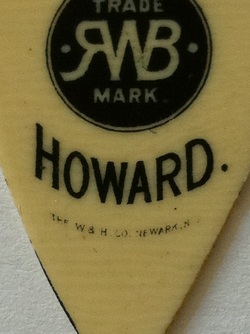 ​This is such a beautiful pick!  It is suspected to be the first printed guitar picks.  I originally thought that it was from the 1920's, (maybe 1926) but a reference in a book (mentioned below) sites that the RWB trademark was used, 'even as late as 1912'.

RWB stands for Rudolf Wurlitzer and Brother.  Rudolf's brother, Franz Anton, was a partner in the company from 1862 to 1890.

While the company was mainly involved in harps, they later produced a guitar under the brandname ‘Howard’ (1896-1920s) so this pick is dated from that era.

There is a really good book called, 'Wurlitzer of Cincinnati: The Name That Means Music to Millions' by Mark Palkovic, which gives the whole Wurlitzer story, telling how the company started from a $700 investment by Rudolf Wurlitzer, to become a well-known brand all over the world.


Why PICK A?  The company gave their harps model names such as Style A, Style B etc., so Pick A followed this tradition.

The tiny writing at the bottom reads:
THE W & H CO. NEWARK. N.J.

There is also a good website on the Wurlitzer Family Graves here: ​https://mechanicalmusicpress.com/history/articles/w_graves.htm