_Apparently The Edge plays with a standard Herdim guitar pick held sideways so that his pick's dimpled side (which is supposed to be held between the fingers to help stop the pick from slipping) hits the strings, creating a grating sound. What exactly does it sound like compared to the usual way of holding a pick, and how does it affect the waveform of the note played?
In other words, Edge's picks have bumps on them which rub against the strings to create his signature 'chime' sound. 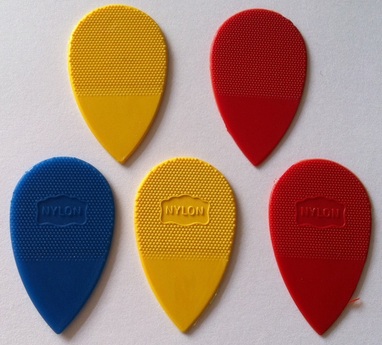 Herdim 'Mandoline' or teardrop. Yellow-thin, red - medium, blue - heavy. Dimple raised pattern in the center of the pick keeps the pick in your fingers! Crafted in Germany since 1960.