Götz, a family business was founded in 1884 by Conrad August Götz jr. in the region of Saxony known as the Vogtland. In the music district of Wernitzgrün / Markneukirchen Conrad August began with the production of strings and rosin. Within a very short time his products won an excellent reputation among musicans and dealers. On account of the unique quality of the craftmanship in the region, the music industry flourished. The instruments still produced in the so-called "Music Corner" make up a large ﻿part ﻿of the world market.

These picks are at least 50 years old and made from rubber (also known as Vulcan Rubber or Ebonite), with a corrugated grip. This type of rubber pick was only produced in Germany becuase they were extremely difficult to make. (Steve Ball tried to have them made for King Crimson's, Robert Fripp, but never managed to obtain the same quality as the German ones. 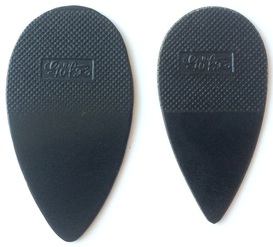 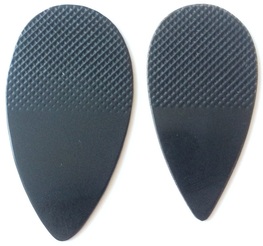