Edmire Pickups are a Norwegian company who obviously make...pickups!  BUT now they make their own picks too.  In 2012 they worked with GMWPICK on how to give all guitarist a better tool to the rich sound of their pickups. They recieved some comments about tone and how to achieve it. They decided that while their pickups are great, with rich dynamics from all the harmonics, it can only sample what the string is doing.

Edmire decided to show guitarists that it's in the pick. First point of contact!
They tried many combinations, but now strongly feel that just the three picks that they have introduced will be enough for everyone to find their tone!

The three models are: Harmonic, Sweet and Ed's Pick 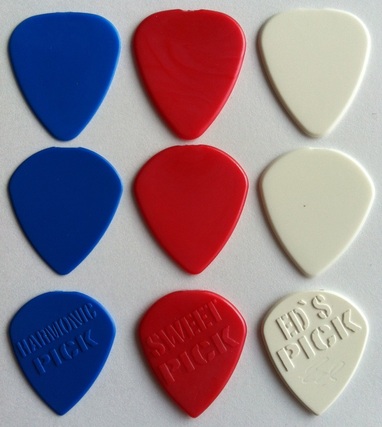 Above shows all the different combinations available. (The Holes and Tumbled models are yet to be released so watch this space!).

So if you do the maths:

3x3x3 = 27 options
(choosing between all grips will give a total of 84 different picks!)

I must say that I don't understand why anyone would want a flat one. No grip and looks too plain to me, but I guess there must be guitarists out there who like them smooth and it's good that Edmire are offering the choice.

However, I really love the writing on the bottom ones and they give it a good grip! Ed's Pick is special because it has his signature imprinted it in - very cool!

Here's what Edmire have to say about their picks:

•Ed’s Pick: The perfect combination! This is the pick that I use for everything. It gives control to go from fat to bright, from jazz to metal, from wet to dry. The goal with this pick was to have a strong groundnote/fat sound on the thinner strings (this is important when soloing on the highest notes) and more harmonics on the bass side (important to get a clear tone without sounding wooly). It’s not very stiff, but still enough so guitarist used to stiff picks can easily adapt to it. A unique blend of material and construction. The best balanced pick for the entire instrument, from the lowest to the highest. Probably the best pick in the world.
•Harmonic Pick: not strong in the bass, but very rich in the higher harmonics. A bright tone we love to use for strumming chords. It’s a rather thin pick, so probably not good for solos. But we love the rich sound it gives, and finally the rhythm guitar can cut through in the mix. Due to it’s thin construction it’s vulnerable for wear.
•Sweet Pick: a stiff pick in a soft material that’s perfect for sweet jazz runs. It’s not a bright pick, but very rich on the lower harmonics. Guitarist searching a fat tone should use this. 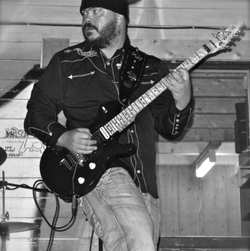 Ed is a really talented guy who not only makes picks and pickups, but plays his own Edmire 'Force' guitar and E'dmire 50W amp.  I guess the only thing he doesn't make is guitar straps....though I'm sure he's probably made those too! This man is passionate about his instrument! (and also lives in one of the most beautiful places in the world which makes me very jealous!)