This year I have really changed the way I think about the picks I play with! I always thought I liked 'normal' medium picks with a bit of flex in them until I had a play with some 'solid' picks!  I've always played rhythm guitar but made a conscious effort this year to try and stretch myself to having a go at lead (in the safety of my own home, I hasten to add!) While a bit of flex suits me for rhythm, I'm finding that the thicker picks are really giving me some good attack when playing lead.

The Regular one was way too thick for me, but then again I'm a fairly light player and have been used to a playing with a flexible pick most of my life! I've just received this Light pick so will give it a go (when my sprained wrist has healed a bit!).

It certainly feels indestructable! What also surprised me is that it was so smooth on the edge that it didn't feel as though it would break the strings.

Here's the official blurb.  The stiffness of the material and the thickness of the ChickenPicks® gives you improved performance. A ChickenPicks® does exactly what you want; because they don't bend action/reaction delay is eliminated. It takes less energy to play the riffs you want, and your picking hand and arm won't tire; you no longer have to overcome the bending action of the pick. And the greater mass of the ChickenPicks® means you don't have to grip the pick so firmly - you can hold it lightly between your thumb and finger... it won't slip out!


Imagine the difference between striking a large bell with a tiny toy hammer, or with a heavy sledge hammer. With the large hammer you don't have to hit the bell very hard to get it to ring; but the tiny hammer just won't get the bell moving. Mass matters...!

This mass also makes it easier to pull clear tones from a bass guitar.


Your tone is fuller too, because with ChickenPicks® a broader frequency spectrum is set in motion. Compare the mechanics of your picking with a ChickenPicks® against a conventional pick. With the thinner pick you are creating more high frequencies than mid and bass tones, often resulting in a shrill, harsh sound; you can hear this excessive treble in the tone of many guitar players.


The sound produced by a ChickenPicks® is clearer and fuller. Even when you play extremely fast riffs, you can hear every note ring out. You have much more transparency in your tone with ChickenPicks®.   Stop Breaking Strings!

to get a full sound with thinner picks you have to pick harder than you do with a ChickenPicks®. This means that you break more strings when using a conventional pick. A ChickenPicks® will reduce string breakage. 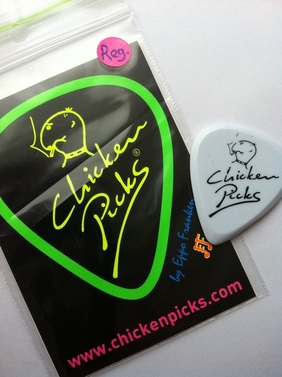